One of my friends over on the PWC Board is traveling over in Germany.  I follow him on Facebook and, when he's traveling, he posts quite a bit.  Just any neat stuff.  He 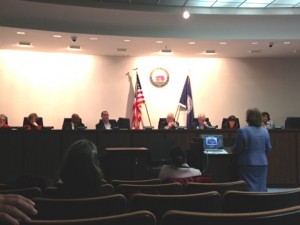 found a locality over there that's obviously trying to reinvent itself and they're using the slogan "Change doesn't start with a maybe".  My personal favorite slogan is "the danger isn't going too far, it's that we don't go far enough".  They're both good slogans that reflect a significant difference in approach.  Not that my favorite slogan is some sort of war-cry but the German version is a shade more genteel.  It's probably a bit more useful for larger institutions.

These slogans are an apt metaphor for how I feel about the Superintendents 100-Day report.  Overall it was a well-delivered report that was carefully crafted.  The Superintendent has been on the job a couple of months but clearly sees the challenges.  But I wanted more.  I didn't want more content, as I indicated above, the presentation was well crafted and delivered by a professional.  No, I wanted more passion.  I wanted an Aveni-esque (apologies Marc) convention stemwinder.  Banging on the table while delivering a steely-eyed indictment of the whole mess followed by a path forward.  A demand.  Passion.  A barely contained energy that imbues others with an unyielding sense of purpose.  Ptichforks.  Torches.  I didn't get it.

No sireee…I didn't get it….and that's probably ok.  In fact, upon reflection, it's probably best.  My admiration of a good stemwinder notwithstanding, the job our Super has is a delicate one.  People, including me, need to be thoughtful about this when they comment.  There are no apt metaphors to the private sector.  Even if the good Doctor is inclined to start knocking off heads, she can't.  School employees are all under contract and were the day she started so her choices are stark: raise the game of your existing employees or plunge the entire institution into chaos by proclaiming that everything sucks but it'll be fixed next June.  And by fixed I mean we'll set up a guillotine in the parking lot and take a somewhat more aggressive approach to the matter….

Despite our differences in approach I think she made the right choice.  My child is in the City schools so I've met many of the teachers in those schools.  Certainly we have had a couple of teachers we didn't appreciate.  That's inevitable in any institution of more than about 2 people but the overwhelming majority of the teachers that we have met are dedicated professionals that just want a chance to succeed.  They need leadership (bozos must be ruthlessly excised from leadership positions) that will get them over the hump and on towards a success that the entire institution can share in.  My child's teachers push her hard.  She has a fair amount of homework that does not consist of copied sheets with checkboxes on them.  I believe our teachers are capable  pro's and that the Superintendent is capable of raising their game while planning a way forward that might involve some pain.

A criticism I've heard from others is that the Superintendent's presentation didn't inventory the problems she found.  My thought in watching it was that she didn't dodge the issue but neither was it an inventory of troubles.  I expect there are several reasons for this but here's the main one:  it serves little purpose in the larger mission.  Certainly she needs to understand the problems but dwelling on them in public doesn't do much other than satisfy those looking to find fault anyway.  Why feed it?

It won't be easy and it won't be immediate but I think we are finally finding a direction we can support.  I know I do.

Copyright 2012 Andrew Harrover.  No part of this work may be reproduced in whole or part without written permission of the author.