Those of you that know me know that I like to ride bikes.  I also like a challenge.  Triathlons are enticing but I'd rather drown than swim laps in a pool for any length of time.  It's hideously boring.  Running is only marginally more tolerable – I'm a career fat guy so training for a run isn't my idea of fun but at least the scenery changes.  You see other fat people running all the time and you silently say "go get 'em buddy, at least you're trying"  People at the pool are far more judgey.  You can see their contempt from across the pool.  Anyway, running is at least tolerable.  So, what I decided to do was cook up my own 3 sport challenge: Road biking, mountain biking and running.

The event I dreamed up is called the "Manassas Crusher".  It's a 40 mile road bike, a 5-ish mile mountain bike and a 4 mile run.  The road bike piece is essentially a loop up PW Pkwy, right on Hoadly, left on Spriggs, right on 2324, left down into Brentsville and then circling up to Manassas Airport where you switch to mtn bike and ride M3.  M3 is a trail that goes up around the civil war fort by the airport, through the back side of Jenny Dean and into old town.  After that it's a 4 mile run that weaves through the neighborhoods around the city.

The road bike part of this deal isn't too bad.  There are 3 climbs on the Parkway that will work you over a bit but nothing terrible.  Things can get a bit trying down in Brentsville as there are rollers there and it's at the end of the ride.  Again, nothing killer though.  The Bike Manassas folk ride this route at least once

a month during the summer.  There are also two good stops on that ride if you need them.  Starbucks at Hoadly and Wi-Not stop on 234.  They are both good but Wi-Not stop is a bit better.  You can drink your coffee without your pinky extended and they also let you fill up water bottles with ice without a fuss.  It was cold and very windy on Saturday so I spent a lot of time with my head down hiding from the wind.  The parkway part of the ride was grueling – the wind has no obstacles coming down the parkway so it gets up to full speed.  There were hills on the parkway that I usually come down at around 30 mph that were 20-ish mph hills on Saturday.  Nevertheless, the road bike is my strongest event out of all 3 and I was pretty comfortable the entire time.

The mountain bike part – taken by itself – is a pretty easy ride.  The M3 Mountain bike trail starts at the Railroad crossing out by the airport (It would be longer but the airport is afraid someone will ride a bike through their woods across the street from the airport and somehow crash airplanes).  It heads down towards the civil war fort, weaves through the woods and eventually comes out by the generation station on Godwin.  From there it cuts up through the back side of Dean school and then into Old Town.  It's mostly but not all singletrack.  As far as Mountain Bike trails go it's very well laid out but not exactly a killer challenge.  Anyway, I texted Sarah when I was about 10 minutes out and she met me at the railroad crossing with an extra water bottle, shoes and mountain bike.  Even though M3 isn't tough, after 40 miles on the road bike, the change in bikes was hard to manage.  The mountain bike is a heavy sucker and it requires a lot of work to horse it around, bunny hop stuff and ride over obstacles.  You've got to pay attention to what is coming up or you'll end up over the handlebars.

The running part started at my house.  I figured it was easier to bike there and switch clothes than it was to do the same in a parking lot or a car.  I got home, swapped my long cycling pants for some base layers and running shoes and headed out the door.  I was running my typical training route so there were no surprises.  Except how hellish those 4 miles turned out to be.  The big guns that cyclists depend on are the quadriceps.  I can always just lay whatever stress on those suckers and demand performance.  On Saturday the big guns walked off the job after 2 miles.  I did a mix walk run for mile 3 and managed to run the last mile but it was absolute agony.  I've never been in that much muscular pain even on my longest and hardest day on the bike.  My legs were screaming.  I also had no water on the run which was not good.

So, why did I do this and what did I learn?  Well, I did it for two reasons.  The first was to see how hard it would be.  In short, it's the most difficult physical thing I've ever done.  The pain I endured at the end of the run was incredible.  The second was to evaluate it as a possible "event" of some sort.  I think it would be cool to have something like this here although the logistical aspects would be trying.  If you had 50-200 people doing the event, the mountain bike trail probably wouldn't be big enough.  How would you get that many riders across PW Pkwy?  Certainly they wouldn't all ride their bikes to my house!  There are many unanswered questions.  The other thing I learned is that it would have to be earlier in the year when the weather is a bit warmer.

Overall, I'd say that I would do it again – even if I did it by myself.  I would like to make the mountain bike part a bit longer but that isn't likely.  It would be easy to make the road bike and running parts longer but that doesn't seem necessary.  I would probably move the running event out of Old Town as the sidewalks are in such disprepair that its dangerous to run on them.  Frankly some of the streets aren't much better – especially when you're tired.  I'm always surprised that, even after a summer training on the bike, I have trouble running more than a mile or 2.  Yeah, I know they are "different exercises" but it would seem that someone who can go 70 miles on a bike would be able to jog a couple miles.  I also learned that balance and pace are really important.  I usually hammer away on the road rides but made a conscience decision to hold back a bit.  That was a good thing because, while I didn't have to fling myself across the finish line to lie in a crumpled heap on the other side, it was a near thing.

p.s.: Thanks to my friend Luanne over at ABS graphics for the logo! 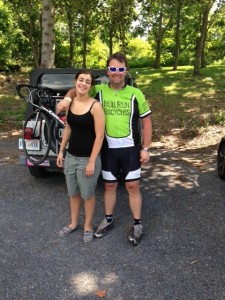