It’s time for a change

I am, probably more than most, a creature of habit.  Routine keeps me on the path.  If I fall off the path, I'm in the weeds and it is hard to get back on.  I find 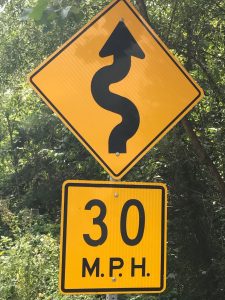 unstructured situations exhausting so I avoid them completely.  This drives Sarah nuts but it's what I do.

My morning routine has been the same for the past umpteen years: I read three papers most every morning and watch either CNN, MSNBC, CNBC or FOX while I eat breakfast (also the same thing every morning with minor variations).  No, I don't read every word of those papers but I dig into what I find interesting or useful.  The TV channels…..well, I do enjoy "Morning Joe" but it isn't nearly as good as it used to be.  Seems like they used to include the occasional conservative back in the day but not anymore.  If you flip from MSNBC to Fox, you'll wonder if you're in the same world as the coverage is so disconnected.  CNN has exactly one guy I like – Jake Tapper.  He's a hard-nosed dude and one of the better interviewers around right now.  I don't read many of the political websites and I honestly had never been to Breitbart until I saw Steve Bannons caricature on SNL.  Breitbart advances a pretty curious worldview that seems to be designed to make them money more than anything else….outrage sells.  Drudge, whatever.  Politico or realclearpolitics….yawn.

I don't write all of that to demonstrate that I'm some sort of superior, well-informed super-human.  No, it's more to catalog for myself how much of this I digest.  It is a lot.  And lately it is all about Trump.  To the folks on the left, every tweet is an impeachable offense.  From the right comes some sort of hand-waving defense and a reference to Hillary's emails.  No, I watched all of this dreck in order to maintain an informed mind and insight into what's happening but I've come to a conclusion:

It ain't worth it.  I'm filling my brain with completely useless crap.

You know what's hurting our country?  MSNBC, FOX, Breitbart and all their ilk, left and right.  These people are simply merchants in outrage mining the fringes of our differences for their own profit…..with the bonus opportunity to report on the divisions they generate.  So I'm done.  No more morning TV.  Yes, I'll read my three papers every morning.  The New York Times has the best food section of anyone and, in case you haven't noticed, I'm a fat guy.  The Journal covers the markets and posses a decent editorial page so I'll read that.  The Washington Post reports on local stuff and has "Washington stories" – you know, about the City, not the politics – so I'll read that.  But that's it.

It'll be an interesting thing to try.  I'll have an additional free hour in the morning and I don't know what I'm going to do with myself.  Maybe I'll write more or just go to work earlier.  I like to do both of those things….and a lot more than watching the endless coverage of the idiots in Washington.  About the only conclusion that I've reached after watching endless rivers of this stuff is that if you view the results of the past 4 national elections through the lens of the public wanting results then those elections make a lot more sense….and it makes the Republicans failure to address big ticket items truley perilous going forward….the people might just decide they're sick of it all…..hopefully it'll be in the paper.