There has been a fair amount of kerfuffle about a recent examination by the Land Use committee of the City Council of the zoning ordinance, text and definitions.  Specifically as it pertains to abortion clinics and other out-patient medical providers.  At the request of Councilmember Aveni, the staff has done some legwork on the question of modifying our zoning code to require a Special Use Permit for either abortion clinics or just all outpatient surgical providers.  We had a meeting a couple of weeks ago about the subject.  The outcome of that meeting was a unanimous recommendation from the LU Committee to the full Council that the staff not address the zoning code on a subject by subject basis but rather pursue a comprehensive re-write.  This does not give priority to the abortion clinic/outpatient request.  The reason that I voted for the comprehensive re-write is that the City has shelled out well in excess of 1 million dollars of taxpayer money over zoning related issues since I've been on Council.  It started with the definition of family question championed by Jackson Miller and the last tranche was paid out studying assembly uses in industrial districts 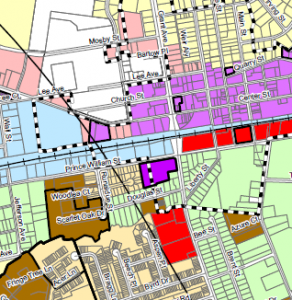 What we are doing, in essence, is re-writing our zoning code to address a single legal issue at a time.  It's hideously expensive and we should stop being dumb about it.  Surrounding jurisdictions have had their codes overhauled and the price is about $150k which seems like a bargain compared to over $1 million.  The public's interest here is having a modern zoning code that governs modern problems, not patching potholes in outdated ordinances.  The framework of the existing zoning code was enacted in the middle 1950's.  We don't have working farms in Manassas anymore and our zoning code should act like it.

At the meeting Monday night the staff gave a presentation outlining their proposal to the full Council.  I admit to being surprised at the number of people there!  Most meetings concerning zoning have zero attendees or only staff but we had a full house!  Given the subject I wasn't surprised to see the pro-life folk there but for maybe the first time ever the pro-choice crowd was well represented.  That was new.  In any event, the Council considered its options and voted 5-1 to direct the staff to pursue a complete overhaul.  The question about abortion clinics and other outpatient providers will be addressed as a part of this larger process and not as an individual item.  The proposal indicated that we will be using in-house staff to do the work and save money so the entire process will take several years.  Depending on the progress that the staff makes the Council may elect to revisit doing the entire process in-house if we have the money.

A word about Special Use Permits: no doubt that those who oppose abortions believe that requiring a SUP will prevent another clinic from locating in the City or at least make it very difficult.  It may make it difficult but it may or may not prevent it.  I've no love of abortion but it is currently legal.  The Special Use Permit process is designed to allow localities to work with applicants to address the "impacts" that certain types of businesses present.  Impacts might be traffic, noise and public health hazards among others.  If the SUP applicant can address the impacts as identified then the SUP is normally approved.  If the Council feels that the conditions for the SUP do not address the impacts they can deny the SUP.  Denying the permit because "we don't like it" isn't a defensible action.  That denial would have a good chance of being overturned upon appeal to the courts.  I'm not a zoning expert but the impacts of an abortion clinic would seem to be about the same as any other doctors office.

However, we do have zoning experts on staff and that's why they're looking at it and not me.  The hospital is a big employer and might attract many more outpatient providers.  Will that eventually cause an issue?  I don't know but the guys we pay will figure it out.

One last thing: this is a controversial issue.  If you comment, follow the rules.  Other blogs allow and even encourage attacks on third parties but I do not.  If you disagree with this action, say your piece and keep it at that.  If you want to say terrible things about other Council members or the Mayor, cowboy up and send them an email under your own name 'cause you ain't doing it here.