This election access to recreation on Lake Manassas became an issue.  Mr. Aveni has stumped for renewed access to the lake throughout the campaign.  The other candidates were a mixed bag but you could probably summarize their thoughts by saying: "it's not a terrible idea if you can figure out how to do it safely and without more cost to the citizens".  I'm not here to beat up on Mr. Aveni or anyone else but I did want to provide an update on the matter as there was some interest in this on the campaign trail….

There will be a meeting of the Finance committee this coming Wednesday.  5:30 in the second floor conference room at City hall.  Item 4 on the agenda is to allocate $45,000 in city funds to study the re-opening of Lake Manassas.  Here is a link to the agenda.  Just thought all those who were interested might want to know.

I know.  I promised.  I wouldn't waste anyone's time with an annoying budget post.  I'm like a compulsive gambler.  Minus the chips, add a keyboard and some half-witted attempts at humor.  A bug drawn to light.  Whatever. 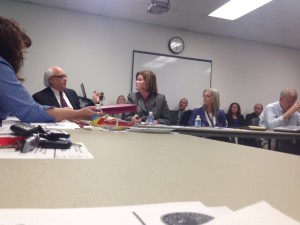 I went to the joint Council – Schoolboard budget work session last night.  Given our new-fangled budget process I really didn't know how long the meeting would be but an hour or so seemed about right.  As it turns out, there were many items to be discussed that were NOT on the agenda last night.  Agendas are not normally a problem for us….anyway, the schools showed up and we talked about thier budget.  I gotta tell you – what a difference.  Gone are the days where nobody really seemed to know the answer and the City people rolled their eyes at the school people.  DMag is really good at what she does.  If the School Board lets that woman leave anytime soon they're idiots.

She was confident and, based on her experience last year, pretty much anticipated the questions she got.  Her staff were prepared and confident.  The age old "why are our per capita costs higher" question has been put to bed (class size and a few odds and ends – PWC is struggling to catch up to us on that account).  There's an actual CIP that's more than a trial ballon.  I didn't sit through the blood, guts and feathers (thanks Jon) school budget sessions but the school board seems united behind their agenda.  They set goals and instructed their executive to prosecute that agenda.  She gave them what they wanted and they've backed her.  That's the way the governance process is supposed to work.

The City Manager is not so lucky.  We gave our executive fiscal guidance, he presented a budget that accomodated that guidance.  He then took the further step of helping make our budget more transparent by placing the Jail costs into the operating budget and not year end.  Paying for operating costs out of what we call "one time money" is a bad idea.  This had the side effect of adding $1.5 million to the city's operating budget.  That's a big number for our General Fund budget.  The Manager realized this and absorbed about half the cost in his operating budget to make the number easier to take.  He also – unilaterally – setup a Jail fund that we don't share with the schools.  This in an attempt to keep the cost as low as possible.  Technically the schools are entitled to half of that money for the jail but they haven't complained so far.  I support the Manager in his efforts.  Given his almost non-existant tenure and lack of major staff members when he started, he put together a hell of a budget.  Is it outside the Council's fiscal guidance?  Yes but the moves he made are wise.  Is it a tax increase?  Yes.  However, in 2004 dollars, per-capita tax revenue is only $100 higher than it was in 2004.  10 years.  $100.  Seems pretty tight to me.  Manassas average tax bill will be $350 lower than PWC.  Almost $2,000 lower than Fairfax.  We're paying jail expenses, not (gasp) starting a Parks and Rec department.  In any event, the Council voted last night to not advance the Managers budget.  I can't explain it.

In this neck of the woods if you're the cheapest place to live….you're just the cheapest place to live.  It's great to have low taxes – believe me I pay almost every tax we have and would prefer that they were lower.  However, if you're the cheapest place to live you have to accept the natural consequences of such an agenda.  As you cut the budget you *will* have to reduce services.  In our budget that means eliminating positions.  You're going to have increasing crime, less solid development, fewer businesses locating in the city and an increasing real estate tax burden as the businesses and well-to-do residents continue to leave.  It's a downward spiral.  It *will* feed itself.  You have to compete in the context you're given.  In my business, if I elect to eliminate a service or not provide a service that my competition provides, I have to accept the consequences.  The City is no different.

Anyway, I think the schools are starting to get it done and I support the City Manager's budget.  Both of our executives know their business and we should support them.  I do.