Well, move-in day has come and gone and all went relatively well.  Erin managed to pack most of her stuff by herself and we did get it all in one car. 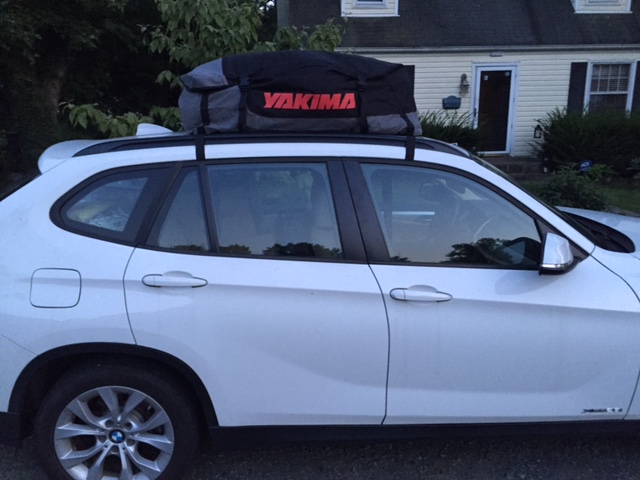 Cheated a little bit by using the "back pack" for the car but everything fit.  We even started off pretty close to the time we wanted to set out.  Didn't want to take a chance on stopping at the Apple House for brekkie so we went to McDonalds.  Haven't been there in an age but the breakfast sandwiches aren't bad.  So, after a 3 hour drive we were at Hollins.  The sign-in line was long.  The process wasn't very clean but it's typical.  You have to approach these things with an open mind.  We got registered, signed in, ID'd, etc, etc, etc.  Then it was off to move in to the dorm.  That part actually went pretty well.  The school had volunteers and staff who had carts and whatnot that made the process painless.  We made a couple of trips ourselves with the breakables but the volunteers got all of our other stuff on a trolley and brought it up.  Setting up the dorm room really wasn't bad.  Make the bed, provide suggestions on poster location, etc.

My part in all of this was relatively minimal.  I identified my role several weeks ago.  In this activity I am not management.  I'm labor and transportation.  I didn't exactly leave the room while it was being setup but I did stay out of the way.  Let Sarah putter around adjusting things and Erin make decisions about locations.  It was fun to watch.  I think Erin and Sarah wanted everything "just so" but I don't know that it is ever that final.  Either way, I observed and assisted.

Now, most college move-in stories would be winding down right about now.  My own was "the family went to lunch together and then Mom and Dad left."  Not at Hollins.  No, they have a ceremony where the other students and staff line a wide sidewalk that leads to the "front quad" and cheer while the freshmen girls walk through the "tunnel."  That was pretty cool and important.  It was just before this ceremony that they separated parents and students.  We walked Erin over to the group of students and then had to walk by ourselves around to the front quad.  Sarah and I walked hand in hand but we both felt lonely already.  We went to the front quad, sat on a rock and watched the kids walk in.  Everyone was seated and there was about an hour's worth of speechifying.  At that point, the students were broken into smaller groups and led off for small group meetings while the parents went to their own meeting. 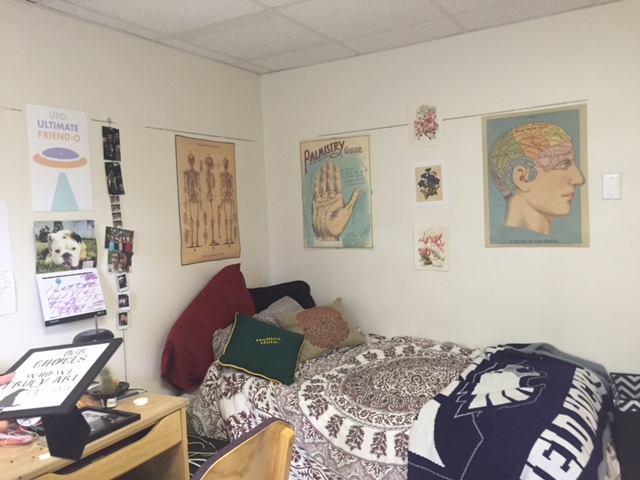 The "Picnic Dinner" following this activity was actually served in the dining hall.  It's an odd name for an indoor activity.  We waited in lines again but it didn't really matter.  After that, it was desert at the President's house and then on to the big moment wherein we leave our only kid behind in someone else's care.  It is, of course, far worse than that.  This isn't summer camp.  She isn't going to come home with a skinned knee that needs antiseptic.  No, We both know that the daughter we see in a month or so is going to be a different person and there is no antiseptic that you can put on that.  Not for her.  Not for us.

I felt so parental and wise over the past month, encouraging her to go and "make the most out of it" and "learn how to think for yourself".  I mean, what kind of idiot thinks like that?  When I reflect on my own college experience I wasn't "learning how to think" or anything even close.  That might have been the net result but I was just struggling to fit in, survive and thrive.  To figure it all out.  To not fail.  Upon reflection, this whole thing seems like a horrible mistake right about now.  But it probably won't forever.  Maybe not even a couple of weeks.  I guess it all depends on who comes back from college, right?

We drove down from the Presidents house to the dorm and we all got out.  Erin got some items out of the back of the car.  I smiled and handed her a roll of paper towels.  We were close to the moment.  Sarah was crying.  Very sad for her.  Erin was stalling.  She wanted to re-wrap the paper towels.  I was telling her she was being silly.  Oddly, there was nobody else in the parking lot other than us.  I looked at Sarah.  Tears running down her cheeks, She nodded.  We both looked at Erin.  Sarah went first: "baby, we have to go."  Everyone was crying.  I grabbed everyone in a group hug and then pushed us all back.  "Erin, we have to go."  We were all sad.  But we all knew there was no other way.  This had to happen.  Erin took one final look and walked to her dorm.  We got in our car. 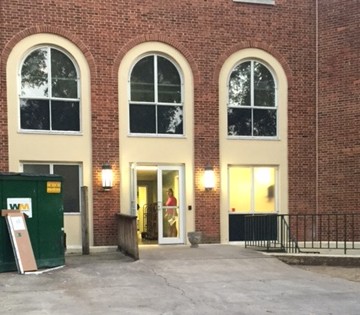 I called out to Erin for her to turn around just as she got to the door and took a final picture….and we were off on our separate ways.  Sarah and I to grow old and fade into the background and Erin on the most exciting part of her life so far.

It really does feel like my life – or at least the most important part of it – is over.  Not in a physical sense although I suppose I could get hit by a bus this afternoon….no, I mean the biggest and most important thing I have ever done is now concluded.  Sarah and I have delivered to the world a person who is capable and self-reliant.  That seems more important than anything else I've ever accomplished and there's not much else worth doing at this point.

What is music really about?

I once went to a "70's party in a Rolling Stones T-Shirt.  Everyone else was in disco-wear.  They thought it strange but, for me, the 70's was about the Stones, Rush, and AC/DC.  I admit to listening to some BeeGees when Saturday Night Fever came out – their music, along with some funk – was really good stuff to listen to.  Tossed into that mix was very early rap and stuff like the Clash and the Pistols, which I really loved.  All the while, I was playing the viola in middle and high school.  I had (and have) a pretty strange taste in music.  Many times it wasn't even so much about the lyrics as it was about how a song sounded.  Especially when I was younger.

It's also fair to say that I came of age in a bit of an odd time.  In the late 70's the stratum of music was in the process of reshuffling – disco was pop but it was, at long last, falling to the harder-edged rock music that had been around in a substantial way since the late 60's.  Punk rock and Rap were also emerging as major disruptive forces in the music business.  The decade of the 80's could be fairly described as the decade of Metal.  That was my decade.  Not so much the hair metal but many of the OG metal bands were my go-to favorites.  Some of that my parents were never very happy about but neither did they complain.

Oddly, the first time I really sat down and doped out the lyrics for a song (this was before the frigging internet you punks!) was late in High School.  I even tried my hand at writing a few songs but I never "got" it.  This isn't to say that any of the stuff was beyond me – I got the words and at least enough of what they meant so that it mattered.  See, some people write "about" things.  Iron Maiden wrote a song called "Aces High."  One quick perusal of the lyrics indicates the song is about the Battle of Britain.  Not difficult to figure out that those guys weren't flying Spitfires.  It's a song *about* something.  Those songs are easy.  I guess what I struggled with was songs whose lyrics are based in the  existential.  You know, the singer-songwriter stuff.    Where did that stuff come from?

Further driving this fugue was the ascendance of what I'll call "The Performer."  People who really don't write any music, they just performed it.  Brittney Spears, for instance.  She said that she spent much of her time before her breakout album "waiting for the right song."  She didn't write the things (at least those early ones), she just sang them.  They might have meant something to her but juxtapose that song with "All Apologies" from Nirvana or even "Royals" from Lorde and you'll have some idea of what I'm talking about.

All I can say in my defense is that I was blinded by the obvious.  It's a thing I deal with.  Music comes from within.  It's molded and driven by experience.  People write about what pisses them off, makes them happy, makes them hurt or makes them wonder.  Sometimes it's as playful as "I wonder how I would write a song about that" and sometimes it comes from genuine pain.  It is, in short, Art.

The next reshuffling of the music universe came in the late 90's when Nirvana come to the fore.  On top of the world for just 32 months, Nirvana swept hair-metal away like a spring shower washes pollen into yellow pools of goo.  I'll be honest, I hated Nirvana when they first blew onto the scene.  Most of the songs on that first album I didn't like.  I wanted to choke someone with a plaid flannel shirt.  Grunge was no answer to anything.  Nirvana's second album was the album that helped me – at long last – figure out where music came from.  The music that really resonates with people.  That stuff that comes from within.  Some artists (to include authors, painters and the lot really) are more successful in rendering their experiences in the abstract than others (Stephen Kings book "Misery", for instance, is about his drug addition) but it all descends from life and it runs the gamut from more to less obvious.

The only reason that I can surmise in utero helped me finally figure it out is that the lyrics are nose-on-your-face obvious.  Given the attention that Cobain was getting in the media, connecting the dots between what was going on in his life and what ended up on that record was pretty simple.

I'm not sure why I felt like writing this but it seemed important.  I'm sorry you elected to read it but I ain't giving out refunds.