Well, the schools are at it again!  D-Mag and her storm troopers of edgimucation descended on the City Council chambers last night to show off some fancy new e-learning program that they're running with.  It isn't the "ipad for every kid" variety but it is a similar device.  Yes, iPads are all the rage but there are other device formats that better lend themselves to this particular application.  This device is a convertible of sorts – an Asus T100.  I think it's a great pick to get started with.  It's also cheaper than an iPad.

The presentation was a bit hard to follow and more than a little jargon-filled but….it kicks ass that the schools are moving in this direction but it won't be easy.  The program requires continuing education on the part of our administrators (D-mag, do you have an iPad that you know how to use?) and educators over the course of several years.  The end result is maybe not a re-making of their approach to education but it's a significant change and I'm glad to see we have a plan for helping our teachers leverage these new tools.  Without that, it's wasted money so I'm glad to see a professional approach!  The kids will pick it up in any event…as they always do.  The program itself starts with some of the "softer" subjects – history, for example, and is phased in over several years to eventually include the entire curriculum in an electronic format.  Seems like a sensible approach. 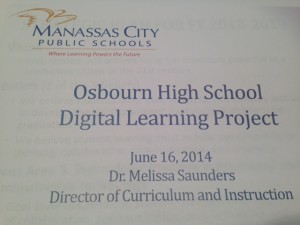 I'm also glad to see that we're being aggressive but not out on the front with this program.  We're using a system that has been deployed in other places and is building a record of success.  My short experience in municipal government makes me believe that "leading the way" isn't a great place for a small locality.  (Witness the BPOL system that we killed off a couple years ago).  The program that we saw last night looks to have been developed in part by McGraw Hill (if you look up "text book" in the dictionary it's under McGraw Hill) and they certainly have the resources to make it happen.  We aren't dealing with a start up and that's good for us.

I did ask a couple of questions and mainly because those are the questions that citizens will ask me: what does it cost?  Is there any research that supports it?  Certainly those are pretty pedestrian inquiries and shouldn't be any trouble for the school folk.

I have had some ask me in the past if I supported these sorts of initiatives?  After all, text books and black boards were good enough for hundreds of years?  My answer is always the same: yes!  A thousand times yes.  Should we be off on fishing expeditions with taxpayer money? no.  This ain't that.  Why wouldn't we want to take advantage of technology?  Would you ask yourself that question in any other part of your life?  Perhaps we should set up some picnic tables over on the museum lawn, get a pile of rags and start doing surgery there because "that was good enough for hundreds of years"?  Step right up sir, I'll take out your appendix – here's a shot of whiskey to take the edge off.  Bite down on this stick and let's get this naughty appendix out of there!  Only a 50% chance of death due to infection!!  But no worries!! Ha Ha!!  I've heard gangrene isn't so bad…….Of course you wouldn't.  We should leverage every sensible tool in pursuit of the single most important undertaking of our local government – the education of our children.

Overall I'm excited.  The schools continue to be on the move and it's only good news for our City.

The School Board has what is called an "organizational meeting" every year.  During this meeting they elect the board chair and vice chair.  The Council only does this after every election and at that time we elect a Vice-Mayor.

The leadership of the School Board during recent memory has consisted of Messrs Albrecht and Bushnell.  I have had the opportunity to work closely with both of these gents.  First with Mr. Bushnell as the chair then Mr. Albrecht.  Both guys were reasonable to work with and good partners.  Both guys genuinely have the schools interests at heart and, even though I've known both guys for years, there is still a healthy tension between us when it comes to city/school policy.  That's good.  A lack of borders invites a lack of respect.

So it was with some surprise that I was notified this afternoon that Mr. Demeria has been elected the new Chair of the school board and Mr. Albrecht the Vice Chair.  It's the end of an era; either Scott or Art has been the chair as long as I've been in office.  Both are dedicated to the success of the schools and have been instrumental in making some tough choices over the past several years.  However, time moves on and I suppose that the balance of the board felt as though it was time for a little bit different approach.

I've known Tim for a long time and, safe to say, that Tim and I have almost opposite political views but that doesn't stand in the way of a friendship that started on the baseball diamond in 1979.  Early on, our friendship was based on the fact that he was much bigger than me but I could outrun him.  Even then Tim was in a leadership position in our youth group.  He was tough and plain spoken.  When I made mistakes Tim let me know about it (and still does).  I expect that he will continue that tradition of direct communication as Chair of the board.

It's a change and it's probably time for it.  I don't say that to denigrate the efforts of the past chairs but we've got a new Super in DMag who, although I haven't seen her lately, I don't expect is at home with the knitting needles, a new CIP and as a board a renewed sense of urgency.  Both past chairs also continue to serve on the board.

I believe that Tim will unapologetically advance what he thinks is best for the kids.  I think we'll see a continued vigorous dialog between the Council and the Board and Tim will help drive the "what's best" question.  I look forward to working with Tim and balance of the board.  Congrats Tim!