Some days the City budget process reminds me of a Motely Crue mosh pit that I visited in 1991.  Other times it seems like we're going to mosh and everyone walks away, thinking better of it.  That second is pretty much what happened last night.  The Council was presented by the City Manager with 3 possible scenarios.  All had various line items and numbers that ranged from the existing tax rate to much, much higher rates.  Some had a line item for "Jail Fund" and others had one for "Community reinvestment" (or something close to that).  As always, several different variables that help the Council arrive at a rate. 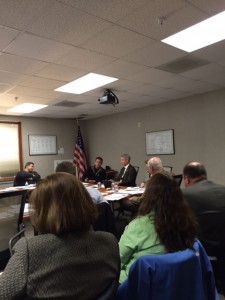 Recall that the pain point here has been the creation of a "Jail Levy" by the City Manager.  That essentially removes revenue from the General Fund that is shared with the schools.  I was very encouraged by the discussion I heard last night.  Mr. Way was as analytical as ever – glad to see that – and I thought Mr. Elston had some interesting observations.  The Mayor offered what I thought was a strong and thoughtful commitment at the end to working with the schools and inside of our existing agreements.  He also encouraged the Council to do the same.  I was glad to see the Mayor do that.  His commitment to our community is undiminished and he's really good at that stuff.  Although I hate to lose him, I would reiterate my endorsement of his candidacy for Senate.

The Manager did offer that he thought the Council had the authority to set aside revenue from the sharing agreement as they see fit.  I agree that the Council has that authority but it's an authority that should never be exercised unilaterally.  If revenue is going to be "carved out" it should only ever be done in consultation with the schools.  It takes a lot more work to build trust between institutions than it does to tear it down.  In this particular instance, creating a "jail levy" seems wrongheaded to me.  In contrast to standing up an entire Fire department from scratch and funding a long-term capital plan, the Jail has been around since I was in short pants.  This seems like an operational cost that the city just doesn't want to pay.  Yes, it's expensive but the revenue sharing agreement is based on the expectation that as the City's costs go up, so do the schools.  This is, in fact, the case.

It might be that this is just too big a nut to crack in a single year – we may need a hybrid solution where the city creates a levy that sunsets in a couple of years as the levy is merged into the operating budget.  I don't know, maybe that's too silly a construct but it's a thought.  In any event, the Council voted to advertise the Managers recommendation of $1.39.  What this means is that this is the highest rate that can be enacted by the Council.  I view this as a good thing.  I don't know whether or not the Council will elect to set the rate at $1.39 but it gives them room to maneuver and, given their comments last night, they are inclined to work with the schools to get where we all need to go.

I'm encouraged, but we'll have to keep watching to make sure our elected bodies work together!  This sort of uncertainty certainly highlights the need for longer-term planning.